The story of Achara 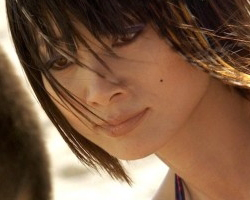 Achara approaches Jack on a beach in Phuket, Thailand. She helps him assemble a kite he just bought and the two share a meal afterward. She greets an unknown man with a Wai (similar to the Hindi namaste), and then he gives her a small, rectangular, flat object in a bag on the first day she meets Jack. At his questioning, she mentions her "gift" to him without further elaboration. She becomes Jack's lover, having sex with him many times over a one month period but not telling him much about herself. He becomes suspicious of her nighttime activities and, somewhat intoxicated, stalks her to her workplace, where she says that he is an outsider. He forces her to confess that she has the power to "see who people are", and then tattoos that information onto them. She says it is an act not of decoration, but "definition". Despite being an outsider, Jack forces Achara to break the rules and "read" and tattoo him. The tattoo supposedly translates literally to "He walks amongst us, but he is not one of us," according to Isabel (though this is not accurate Chinese). According to Achara, it signifies that he is a leader, but that being one makes him "lonely, and frightened, and angry". When Achara's brother Chet discovers this transgression later, he and a group of Thai men beat Jack severely, and force him to leave the country, never to return.
Back to List