The story of Alexandra Rousseau 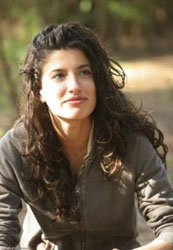 Alexandra 'Alex' Linus, also known as Alexandra 'Alex' Rousseau, is the daughter of Danielle Rousseau, and Robert, another member of the expedition, whom Danielle has admitted to killing. However, shortly after her birth, she was abducted by the Others and raised believing that she was the daughter of Benjamin Linus. Alexandra is also the girlfriend of Karl. It seems that she does not always agree with the Others' beliefs and goals, and in most of her appearances in seasons 2 and 3 has been seen aiding the survivors in escaping the captivity of the Others. She knew nothing of her real mother until the hike to the radio tower when they met for the first time, and Ben told her the truth about her mother ("Through the Looking Glass"). Until this she believed that her mother was dead. She is unaware that her mother killed her biological father. According to Danielle, Alex was taken by the Others when she was one week old. However, Danielle claims never to see one of the Others during her first sixteen years on the island and used the term interchangeably with the whispers at the time she told her story. Regardless of the exact circumstances, Alex was raised by Ben as one of the Others. She was told that her mother was dead.

After sixteen years, she saw that the Others had captured an unknown pregnant woman, whom she later learned was Claire, whose unborn child the Others planned on taking via cesarean section. She woke Claire up, and after a quick explanation showed her the operation room where the surgery was going to take place. Claire started to resist, so Alex drugged her and dragged her out of the Staff, saying Claire would thank her one day. ("Exodus, Part 1"), ("Maternity Leave")

On the survivors' 52nd day on the Island, during the confrontation between the Others and the search party that Jack assembled to find Michael, Tom called out for Alex to bring the captive Kate out to the torches circle. Instead, Pickett brought her out; Alex was trying to get Pickett out of earshot so that she could talk to Michael and ask him if Claire had given birth to her baby and whether it was a boy or a girl. Michael was gagged and stunned, so he could not respond. ("Three Minutes")

On the survivors' 69th day on the island (Jack, Kate and Sawyer's second day on the Hydra island), Alex tried to communicate with Kate while she was working at the labor area of the camp. Alex asked her about a guy named Karl, and if Kate had seen him around the cages area. She commented that Kate was not even supposed to be in the cage she was held captive in. She also remarked that Kate's dress used to belong to her. ("The Glass Ballerina")

Three days later, on the prisoners' 6th day on the Hydra island, Alex intruded again into the quarry, an area she was not supposed to be in, and attacked two of the Others using a slingshot. She aimed it at Danny, who was aiming a gun at her, and demanded to know where "he" was (referring to her boyfriend), and demanded to talk to Ben. Danny refused, and Alex was taken away by one of the Others. Alex cried to Sawyer and Kate, who were lying on the ground under Danny's orders, that whatever the Others tell them, they should not believe. She warned Kate that they would kill her boyfriend, "just like they killed mine." ("I Do")

In the underwater section of the Hydra station, Alex communicated with Jack through the intercom, asking him to "try it, the door", which was usually locked. Jack tried, and the door was open. ("I Do")

Later, before going into surgery, Ben asked Juliet if Alex had asked about him. Juliet said she hadn't and that she didn't know where Alex was, just that she had been taken home the previous night. ("I Do")

The next day, Alex helped Kate and Sawyer to escape from Danny, Ivan and Jason by hiding them in the hideout, right after hitting Jason with a rock. She told them she had a canoe that could get them off the Hydra Island, but she would only help them if they would help her to rescue her boyfriend, whom Sawyer identified as Karl. ("Not in Portland")

When they reached a smaller part of the Hydra compound, Alex told them that Karl was being held somewhere in there. She pretended to hold Sawyer and Kate captive, and tried to convince the guard, Aldo, to let them in. He said she was not allowed in, but she used her father (later revealed to be Ben, likely her foster father) as an item for negotiation. As Aldo called Ben for confirmation, Sawyer attacked him, and Kate knocked him out. ("Not in Portland")

In the facility, the trio found Karl in Room 23, strapped to a chair with goggles, forced to watch what looked like a brain-washing video. They freed Karl and ran to the nearest beach, where Alex's canoe was waiting for them. Danny suddenly appeared, ready to shoot Sawyer, but was shot by Juliet who walked out of the jungle. Before Kate and Sawyer left with Karl, Alex and Karl were reunited for the last time, as Ben, according to Juliet, would never let Karl go if Alex left with him. Ben is referred to Alex as "your father". After the launch of the canoe, Alex went back to the Hydra with Juliet. ("Not in Portland")

When Locke takes Ben hostage, Alex (who lives in Ben's house and refers to him as "Dad") is sent to retrieve Sayid's pack, which contains the C-4. Sayid tells her she looks like her mother, and she replies that her mother is dead. He tells her, "I'm sure that's what they told you," leaving Alex shocked and confused. While accompanying Locke to the submarine, she warns him that Ben is manipulating him, but he doesn't seem to care. Danielle sees Alex from the forest around this time, but does not reveal herself to her daughter. ("The Man from Tallahassee")

As Ben and Locke collect water on their way to see Jacob, Alex arrives to give Locke a gun so he will be safe, much to Ben's surprise. She coldly adds "Happy Birthday, Dad," as she leaves. ("The Man Behind the Curtain")

The following day, Alex is preparing a white rabbit when she sees Ben has made it back to camp. She questions him as to what happened, and where Locke was. Ben gives her back the gun she originally loaned Locke, saying, "Here's your gun back." Afterwards, Alex listens to Ben's abrupt change of plans, and runs off to find her boyfriend, Karl. Alex tells him to warn the survivors as soon as possible that the Others are coming. Alex questions whether Ben truly is her father during this meeting with Karl. ("Greatest Hits")

When Ben decides to go by himself to stop Jack from using the satellite phone, Alex asks to go with him, and Ben agrees. While they are on their way to intercept the survivors, Ben informs Alex that he allowed her to come along because he has chosen to disown her as retribution for her betrayal, and she will be staying with her 'new family' instead of going back with him. He also tells her that the reason he locked Karl in a cage was that he didn't want him getting her pregnant. After Ben fails to dissuade Jack from carrying out his plan and gets beaten by Jack for apparently having Sayid, Jin, and Bernard killed, Alex sees Danielle, for the first time, and the bleeding Ben tells Alex that Danielle is her mother. Alex and Danielle then agree to help each other tie up Ben, whom they drag along to the Radio Tower. ("Through the Looking Glass")