The story of Cassidy Phillips 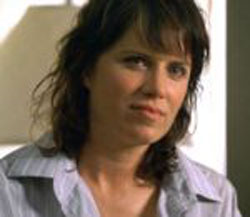 Cassidy Phillips was a recently divorced woman whom Sawyer conned out of a known $600,000. After thwarting his usual routine of "accidentally" dropping the briefcase full of money, she asked him to teach her how to con and they spent the next few months working small scams. Once she felt confident in her skills, she asked Sawyer to teach her a long con, and offered her own money as capital. The two of them may have been in love; however, Sawyer still took her money, and left her. After realizing she'd been conned, she set out on the road. While in Iowa, she tried to con people using the techniques she had been taught by Sawyer. Unfortunately, she was not as successful as she hoped. When a man she was trying to con at a service station threatened to call the police, a young lady stepped forward and pretended to buy her fake jewelry to help her out. The woman turned out to be Kate. The two got together for drinks at a local bar where Cassidy promised to help Kate talk to her mother, Diane. Cassidy first helped Kate by going to Diane's house disguised as a Bible saleswoman who could easily be mistaken for Kate, so that they could have an idea of how heavily guarded Diane's house was. After being taken in for questioning and eventually released, Cassidy and Kate decided to take a different approach. While in the diner that Diane worked at, Cassidy spilled some food on Diane, forcing her to go to the bathroom where Kate was waiting to talk to her. Afterwards, Cassidy confided her story about Sawyer to Kate and the fact that she became pregnant by him while they were together. However, she never told Kate his name, and the two of them went their separate ways. Cassidy later reported Sawyer to the police, landing him in jail. While Sawyer was in prison, Cassidy visited him and showed him a picture of a baby girl named Clementine Phillips, whom she claimed was his daughter. Sawyer rejected the notion that he could be her father; but later opened a bank account in Albuquerque, in Clementine's name, with the earnings from his prison con.