The story of US Marshal Edward Mars 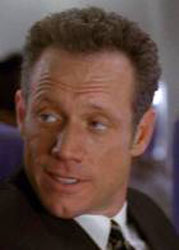 Edward Mars was a United States Marshal who sought to apprehend the fugitive Kate Austen. Their years-long game of cat-and-mouse came to an end when Mars arrested Kate in Australia. He was escorting her on Oceanic Flight 815 to Los Angeles when the plane crashed on the Island. Mars survived three days in excruciating pain, until Sawyer attempted to end his suffering by shooting him in the heart. Sawyer missed the heart and only perforated Mars' lung. Jack then euthanized Mars. Edward Mars arrested Kate for the murder of her biological father, Wayne, in a bus station while she attempted to flee to Tallahassee. While he transported her by car to her arraignment in Iowa, a black horse caused him to veer off the road, allowing Kate to escape from Mars' custody, and making recapturing her a very personal matter to Mars. He knew that Kate felt guilty about her mother, so he set up a 24-hour stakeout around Diane for when Kate would inevitably show up. Cassidy revealed the extent of the stakeout when she dressed up to look like she was Kate posing as a Bible saleswoman and was tackled by several agents at Diane's front door. Although two agents were sitting in the diner where Diane worked, Cassidy helped Kate by spilling food on her mother so she would find Kate in the restroom away from the agents. In the months that followed, Kate began a pattern of calling Mars on religious holidays. After she tried to visit her dying mother, the police were called to the hospital to arrest Kate, who was on the run. Kate left behind her plane, which was an item shared with her childhood sweetheart Tom Brennan, who was killed during Kate's escape from the hospital's parking lot. After marrying Kevin Callis, Kate called Mars again to tell him she didn't want to run anymore. Sensing that Kate had fallen in love, Mars offered to stop chasing her if she could really settle down. But fearing Kevin, a police officer, would eventually discover her identity, Kate fled her husband and the chase continued. Mars later told Kate that her plane was in a safety deposit box in New Mexico; Kate executed a bank robbery to recover it. Mars at last caught up with Kate in Australia, arresting her and arranging to bring her to the United States to stand trial. Mars was seated in seat 27G on Flight 815 next to Kate, whom he was escorting. He carried a Halliburton suitcase with four guns and ammo in it, and had a fifth gun in an ankle holster. During the turbulence that caused the crash, Mars was hit on the head by falling luggage, knocking him out and causing his head to bleed. While he was unconscious, Kate took his keys to remove her handcuffs, and then placed the oxygen mask on his face.
Back to List