The story of Jason 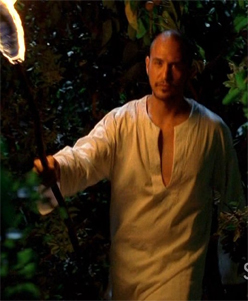 Jason was a minor Other who on numerous occasions aided Pickett, Ben, and Ryan Pryce. Jason is credited as a character in some episodes, while in others he appears as a part of the background cast. Jason was first seen when he assisted Matthew in the Hydra operation room. Jason tells Sawyer to bite down on a stick, "for the pain" and holds him down. He later accompanied Ben and Sawyer on their journey to the Hydra Island lookout. The next day Jason assisted Jack to Colleen's funeral and attended the funeral. Jason and Danny Pickett watched Jack surgery on Ben, however Pickett took this opportunity to leave the operating room to kill Sawyer, despite Jason's suggestion not to. Pickett and Jason made their way to the cages area and held Kate at a gunpoint, so she would not try to prevent Pickett from shooting Sawyer. However in an unexpected movement, Pickett and Jason are beat up and left unconscious locked in Sawyer's cage by Kate and Sawyer. After being locked in the cages with Pickett and being freed by Ivan the three of them caught up with the fugitives on the beach, but failed to catch them. They continued their chase to the part of the Hydra compound, where they found Aldo on the floor, informing them that Kate, Sawyer and Alex had been here and had freed Karl. Weeks later, Jason is seen at the Others' camp when Ben came back from taking Locke to see Jacob. Jason was one of Pryce's "ten best men" who took part in the raid on the castaways' camp. He survived the initial explosions of the tents, and helped to capture Jin, Sayid and Bernard. While Hurley ran Pryce over with the DHARMA van, Sayid tripped Jason, and with his legs, broke Jason's neck, killing him.
Back to List