The story of Jason McCormack 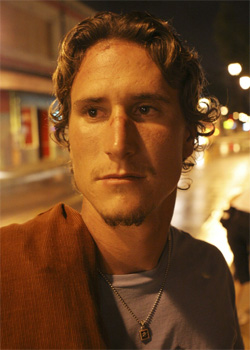 Jason McCormack shot Ana Lucia while she was pregnant and on duty as police officer. Ana had shown up in response to a burglary call while pregnant. Upon her arrival, Jason (the perpetrator) walked out the front door soon after her arrival. Instead of complying with Ana's demands to put his hands up, he insisted that he was a student, and that he needed to show his identification. Ana believed him, but instead of pulling out an ID, he pulled out a gun and shot Ana. He was using hollow point ammunition that wouldn't penetrate a standard police issue security vest, but the shock was enough to kill Ana's unborn child. This caused Ana's boyfriend to leave her. Jason subsequently escaped. Sometime later, however, Jason was caught by the police, and confessed to shooting Ana. However, Ana did not positively identify Jason, and he was set free, much to the chagrin of Ana Lucia's mother. A week later, Jason went to a bar, and played pool. Ana Lucia followed, however, and confronted him after he left the bar, in the parking lot. After telling him she was pregnant, and then shot him six times, three of them at point blank range. She then walked away, throwing the gun in the dumpster. After his corpse was found by the cops, Ana's mother expresses concern that Ana was the one who shot Jason. This mistrust leads to Ana quitting the force.
Back to List