The story of Rachel Blake 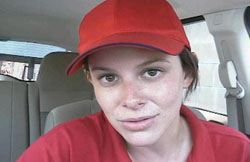 Rachel Blake is the protagonist in the storyline of the Lost alternate reality game The Lost Experience. She is a 25 year old woman investigating The Hanso Foundation, effectively leading players through the game as the main driver of the plot. From a tender age, it became clear that Rachel Blake was a gifted young woman, and it was little surprise that she managed to secure a prestigious job working for the Widmore Corporation when barely out of her teen years. However, after her mother's death, Rachel wondered how a single parent could have afforded her daughter's first-class education, and began to look at her finances. She discovered that her education had been paid for by a mysterious trust fund, the money for which had been donated by the Hanso Foundation, a Danish based scientific research company. Intrigued by this, Blake quit her job (receiving a healthy severance pay) and began to investigate the corporation, consequently realizing that they were involved in corruption of the worst kind. With new resolve, Rachel decided to continue her investigation of the company by travelling to their headquarters in Copenhagen, at the same time exposing them for what they truly are to the world. Under the guise of the hacker "Persephone", Rachel sabotaged the Hanso Foundation website through flash hacks, exposing truths about their dealings. She then moved on to publish blogs and videos on her investigations, culminating in her publishing a video which would "tear the Foundation apart". In her final video, it was confirmed that Rachel is the daughter of Alvar Hanso, explaining why his company financed her education. It was also revealed in the aftermath of the Experience that Rachel's mother once worked for the Hanso Foundation
Back to List