The story of Sun Kwon 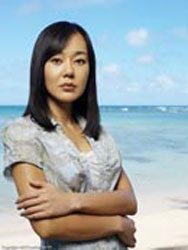 Sun-Hwa Kwon (née Paik: 백) (Korean name: Hangul: 백선화 or 권선화, Hanja: 白善華), born March 20, 1980, is one of the middle section survivors of the crash of Oceanic Flight 815. She was traveling on the plane with her husband, Jin-Soo Kwon. Their marriage was very unstable, on and off the Island, due mainly to Jin's controlling and violent nature, but also because of Sun's many secrets. Sun spent the first forty-odd days on the Island disconnected from the rest of the survivors, as nobody, even Jin, knew she spoke English. Some of the secrets from her previous life began to resurface on the Island, such as Jin's infertility and Sun's affair: these revelations caused several rifts in their marriage. Despite these difficulties, Sun and Jin managed to arrive on the freighter: when the helicopter landed to collect them, Sun boarded it, thinking Jin was behind her, but Frank lifted off without waiting and the ship exploded without warning with Jin on-board. When she returned to civilization as one of the Oceanic Six, she blamed her father and Ben for Jin's death, and she remains on good terms with only Hurley. Sun has contacted Charles Widmore because they had common interests in killing Ben Linus. However, Ben managed to convince her that Jin was still alive by taking her and Jack to Eloise Hawking, who eventually got the Oceanic Six back to the Island, by instructing them to take Ajira Airways Flight 316 and recreate some of the circumstances that got them there in the first place.